Hanoï, a train in the city.

Each main city has its own particularities. Standing out element, specialities, anecdote... A place, a monument, an activity which always comes back (or not) in the stories of travelers.

Hanoi reserves numerous surprises within its 3 345 km2. 37Degrees decided to deal with its train which several times a day gets through a very populated district of the city center.

After a few days in Hanoi, we finally leave to meet the train. We had heard about this train going through a tight neighbourhood in Hanoi several times a day. Thus, we leave this morning to meet the people that live next to the train rails.  We only have a few informations about it, so we decide to start from the top of the center to follow the rails all the way down. We hope that those rails will be the right ones and that the trains are still using it. Our fingers are crossed and the camera is ready to shoot while we walk through the city. 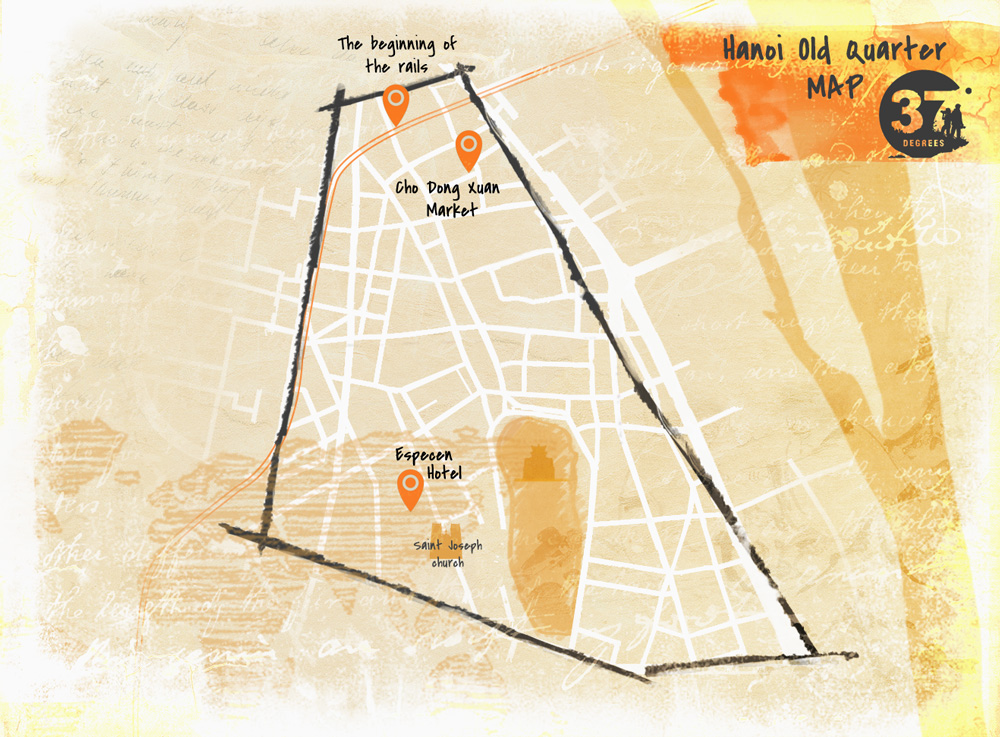 We travel numerous small districts where the life is going full swing, markets are getting ready, Pho getting warm. This north part of the city center is much less touristic, from the moment you exceed districts " Hang Gai" and " Hang bac " towards Dong Xuan. The market " Cho Dong Xuan" is also a really dynamic place in the city. 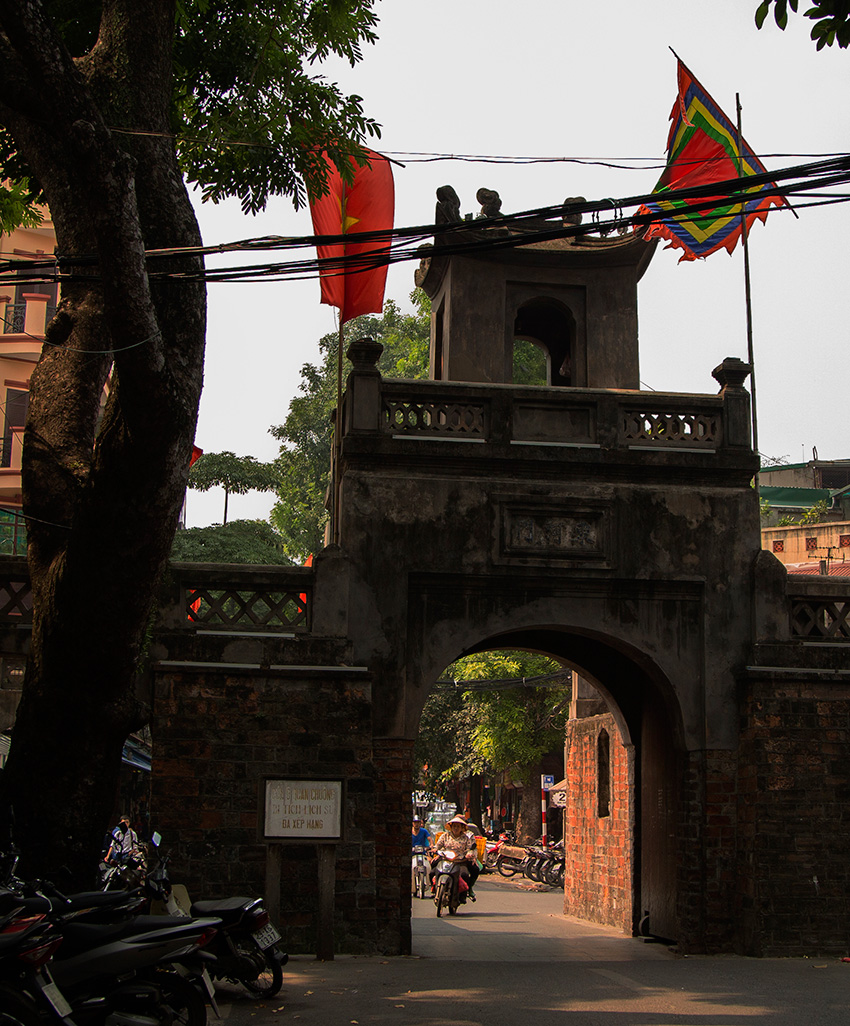 Walking up on Nguyen Thien Thuat we finally cross the rails. But they are high at this location and it's impossible to walk on it. So we start looking for a way to get on it ! Even though the rails are higher than the ground, they are defenentely a part of the district life. Small shops use it as wall to show their clothes, restaurants use it to seperate the kitchen from the roads... We carry on, keeping an eye on the rails as we walk. 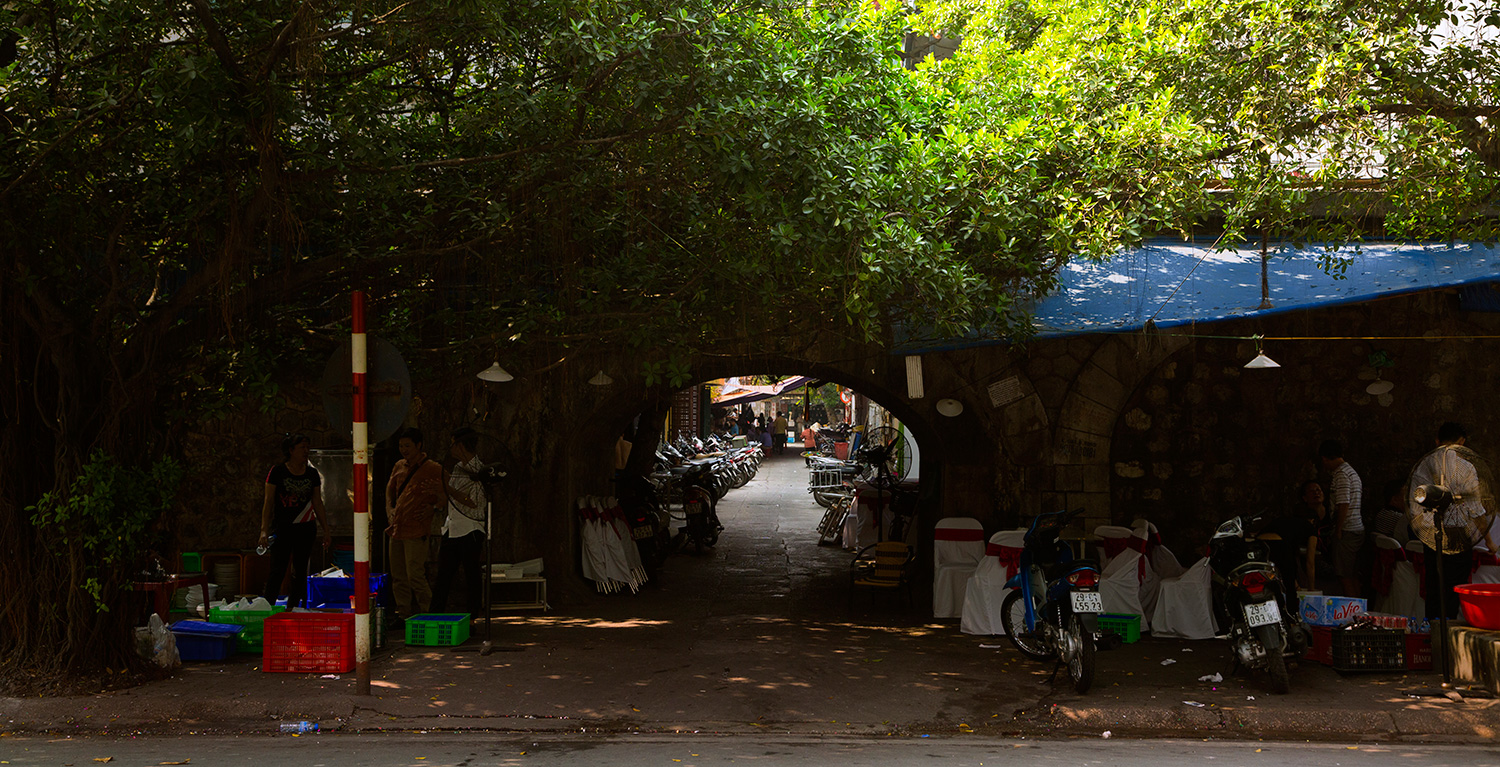 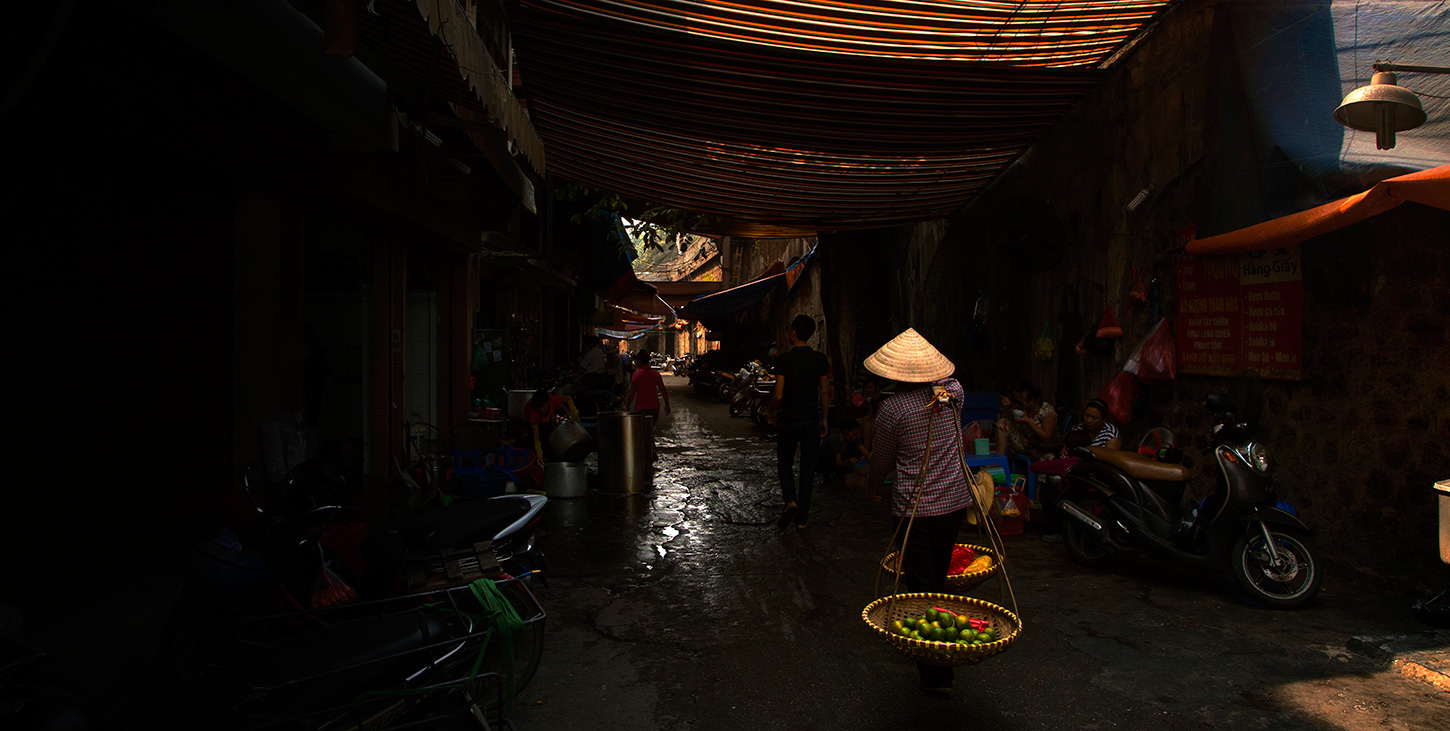 Small open corridors serve as galleries for numerous small stores very specialized under the rails. Bridges above the main roads of the city follow one another. Finally, we get to stairs and get up the rails. Youhou ! That's what we were looking for. But, we can't hold a small thought about what if a train just comes now? We actually don't have any idea of the frequency of the trains and if the trains are still using those rails.  Curiosity takes over fear and we decide to carry on. For now, the houses are only on one side of the rails, so we carry on looking for the moment where both sides are blocked by houses. 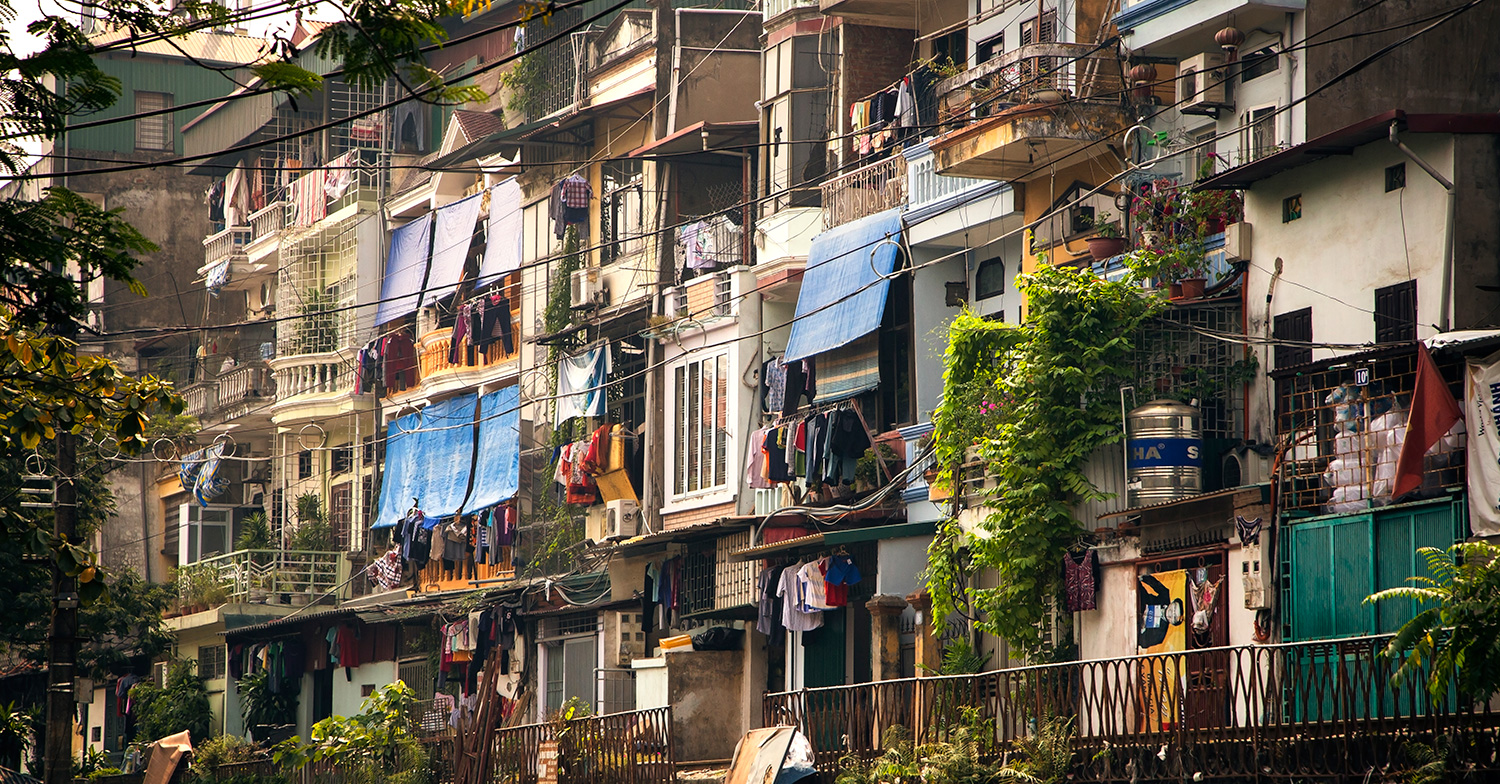 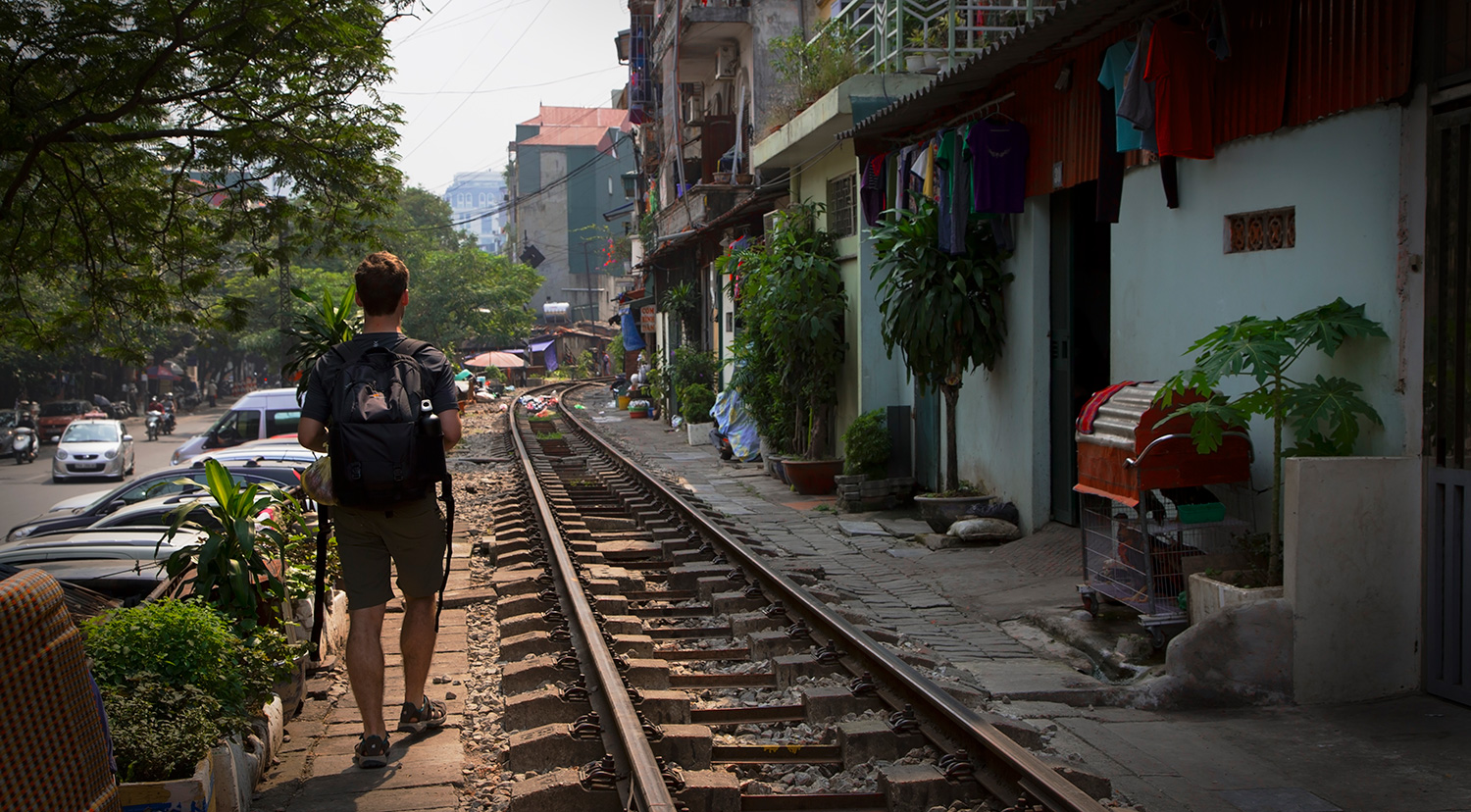 Still not yet! Half an hour of walk later and we fanilly see it on a curved part of the rails. Houses are getting closer and closer to the side of the rails, there is just enough place for us to walk, and motorcicles have to ride in the middle of the railway. From now on, there are houses on both side with people doing their everyday life activities.

Sometimes an opening, a road crosses the rails with motorbikes passing by really fast. We decide to wait for the next train on the corner of a street crossing to rails. The security girl of the area tells us that a train should come in an hour. And finally a little more than an hour later we hear the train entering the city. Fast, it bushes by the motorcicle park on the side.

The life on the rails starts quickly after the train passed by. People carry on their activities like nothing happened. Dogs sit on the rails again, children carry on their games and women get the dinner started.  You could almost forget that train come through this way several times a day. 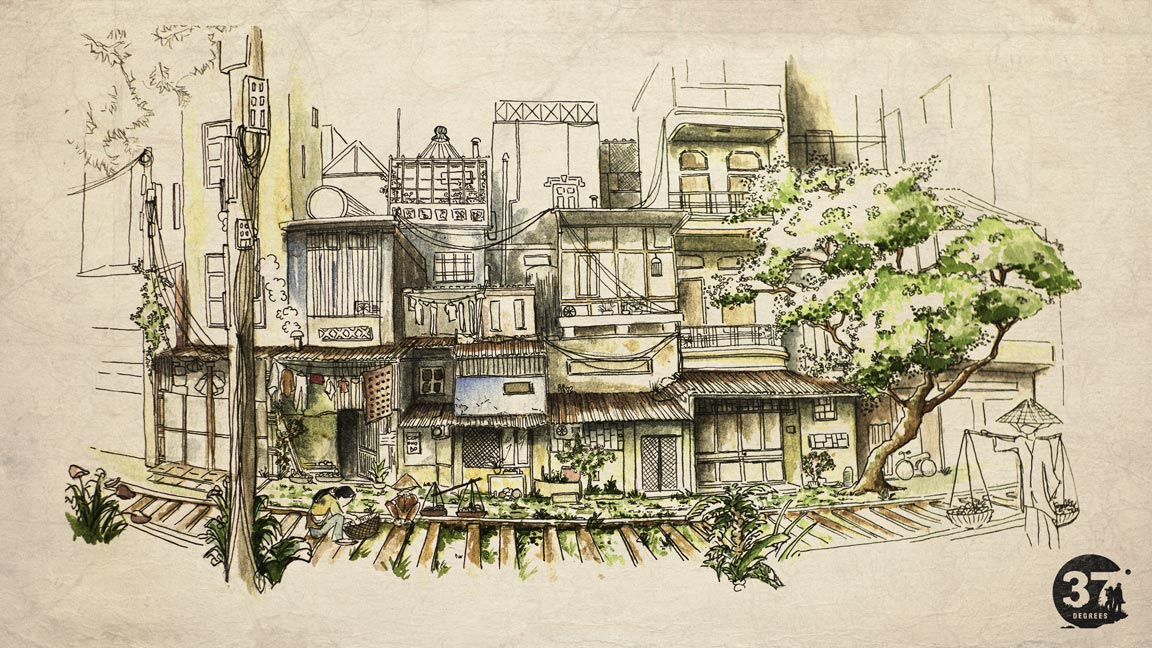 The inhabitants are surprised seeing us near the rails to wait for the next train. Children are curious, some come to speak to us. One of them was sent by his mother to practice his english and speaks really well. He tells us about the timing of the trains and that it should cross Hanoi 4 times in the morning and 4 times in the afternoon. In fact, it's the only railway to cross Hanoi for the North-West . It's hard to tell if this district is poorer than others though.

Later, we learn that it was really poor before, but as the central district just next to it got really touristic, people with more money started purchasing houses on the rails sides. It is in fact a really central area close to everything. A lot of people there now live thanks to touristic business. And also, apart from the train 8 times a day it is actualy a really calm area !  No traffic, less polution... Almost Heaven for a city like Hanoi. 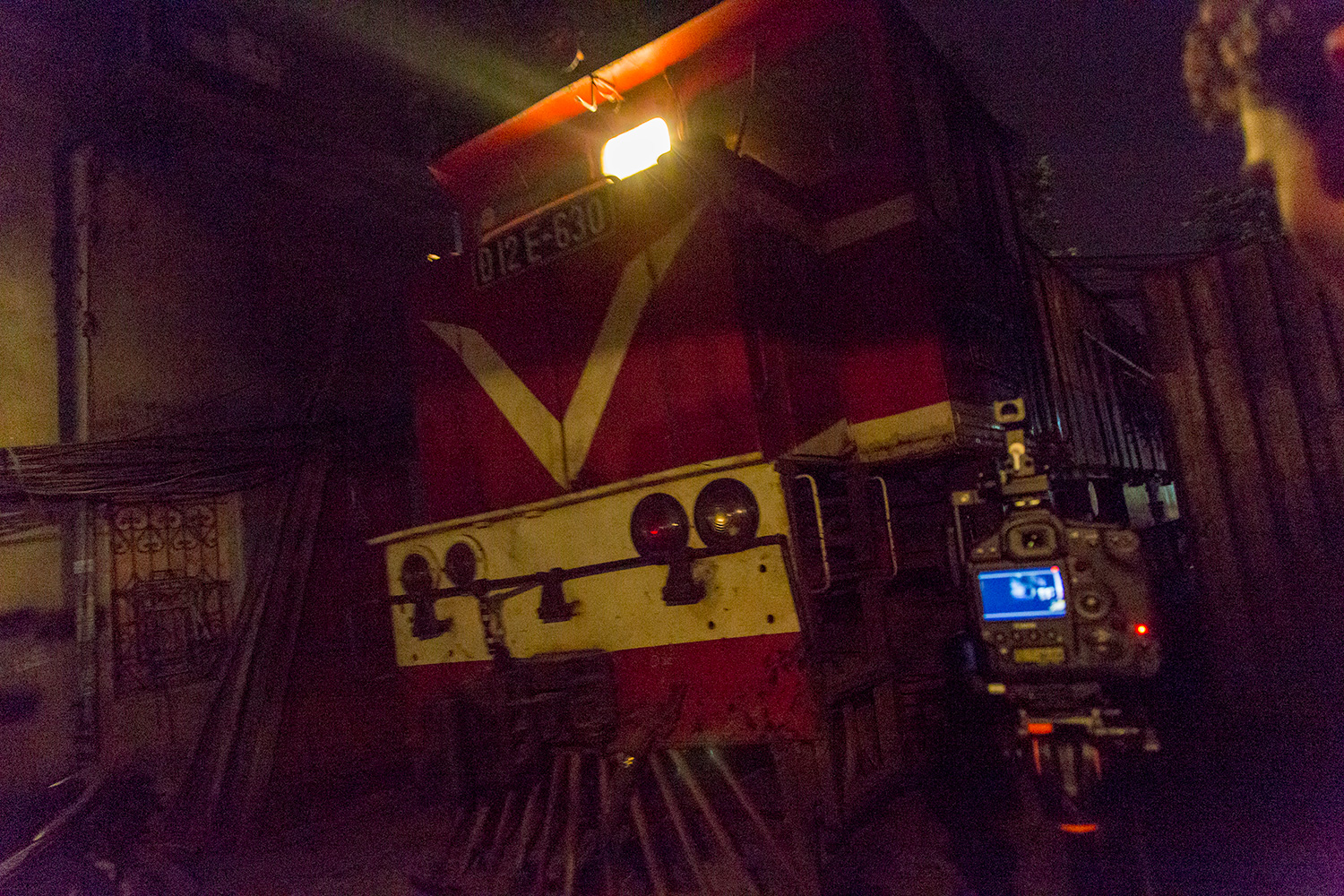 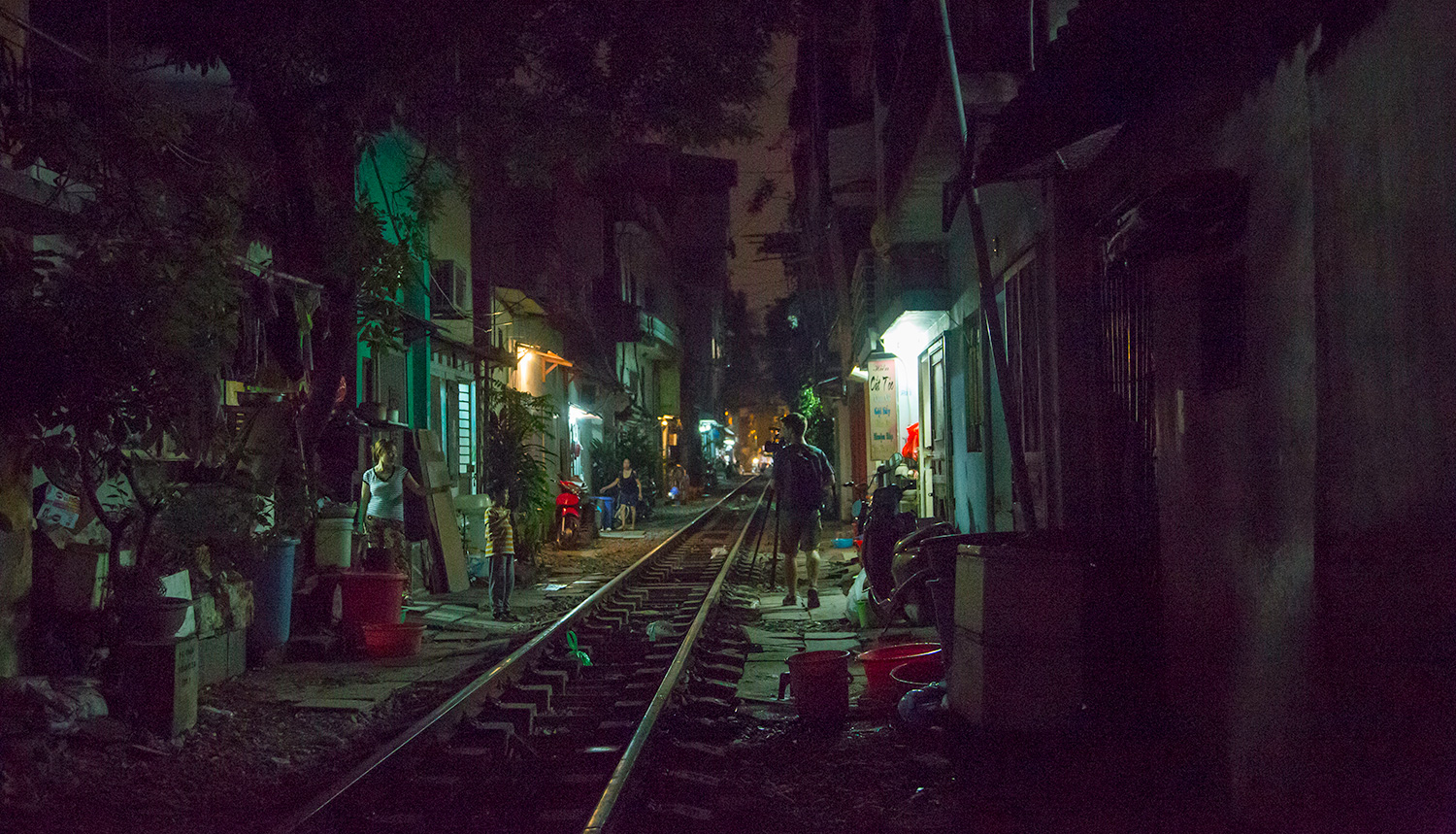 Once, the sun has set, it is even more impressive ! You start to hear the noise, then a glow get closer and closer lighting the rails. The noise carry on to make sure everyone is aware. Before each train, the security person checks the rails to make sure nothing is in the middle. And the metal monster rushes again in the middle of houses and roads, pointing out the railway with its huge spot light. And this is the end of a new day in Hanoi !

Tweet
More in this category: « La Palma, the volcanoes trail